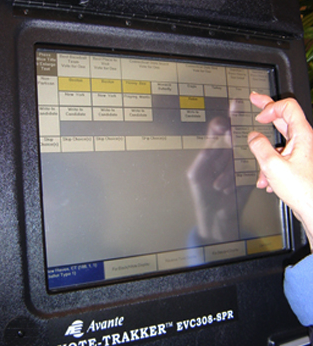 The Avante Vote-Trakker is a direct recording electronic voting system that can be equipped with a voter verified paper audit trail printer. Voters use a “smart card” called a Voter Identification (VID) card to initialize the machine. After voting, the voter inspects a paper printout of their vote behind clear plastic. The voter then either cancels the vote or approves it. When cast, the paper record of the vote is deposited into an attached ballot box and the electronic record of the vote is written to flash memory and a hard drive within the machine. At the end of the election, the contents of the hard-drive are written to a writeable CD-ROM. Finally, the attached ballot box and the CD-ROM are transported to a tabulation facility where the CD-ROMs from all precincts are read into a central tabulation computer and summed to produce an aggregate vote count.

Avante uses what is called a contactless, non-directional smart card. Respectively, this means that the chip inside the card is not exposed and it does not matter which way the card is inserted into the machine. The ballot style specifies the races in an election and can be specific to a precinct and, during a partisan primary, the voter’s political party. The card contains a 24 character randomly generated number that is used to connect the electronic ballot with the paper record.

After confirming the voter is registered, he or she is handed a “smart card” called a Voter Identification (VID) card to activate the voting machine. This allows the machine to vote once. A “smart-card” is a card the size and shape of a credit-card which contains a computer chip, some memory and basic data such as the voter’s ballot style.

After using the touchscreen to vote, the Vote-Trakker can then print a paper record displayed under clear plastic to avoid manipulation. The voter inspects the printout for accuracy. If the vote is incorrect, the voter indicates so using the touchscreen and is given another chance to fix any mistakes after the paper record is deposited in a compartment in the machine for spoiled votes. If the vote is correct, the voter indicates so using the touchscreen and the machine prints a barcode on the paper record and drops it into the ballot box attached to the machine. At the same time, the vote is electronically recorded internally to flash memory and an internal hard drive as ballot images. At the end of the day, a poll worker with a special poll worker card closes each machine.

The contents of the hard drives in each machine are then written to a writeable CD-ROM (also called a CDR). The CDR can only be written once and cannot be changed afterwards. The CDR with the vote data and ballot box for each machine is delivered to a tabulation facility. At the tabulation facility, the vote data is read off of the CDRs from each precinct and fed into Avante’s tabulation software. What is done with the paper audit records varies highly by state and county.

Ideally, the Vote-Trakker’s exposed ports, memory card access areas and case seams would be covered with tamper-evident security seals. The integrity of these seals should be maintained at all times, and only breached under controlled, explained circumstances. Seals should be logged to maintain chain of custody of sensitive materials. The Memory Card is Sensitive. Corrupt memory cards can introduce viruses, cause the main election server to crash and falsify votes. Access to the memory card should be controlled, monitored and logged at all times.