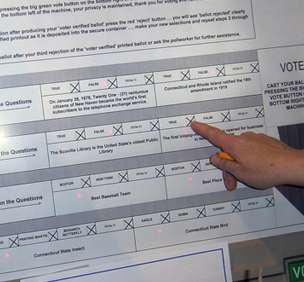 The Danaher Shouptronic 1242 (also known as ELECTronic 1242) is a poll worker-activated full-face direct recording electronic voting system. Voters press the front of a mounted ballot (see rightmost image above) underneath which a touch-sensitive matrix of switches records choices. Poll workers activate the machine using an operator panel on the back of the machine to choose the ballot style and voters make choices by touching a numbered box next to their choice. When cast, voting records are recorded internally to eight memory locations: three banks of battery-powered RAM, three banks of EEPROM memory, one bank of EPROM memory and a removable memory cartridge, which contains both EPROM and EEPROM memory.

When polls are closed, poll workers remove the memory cartridge that contains the vote records from each machine. These cartridges are then either physically transported to a tabulation facility or their contents transmitted over modem using a cartridge reading device.

In 1984, Robert J. Boram filed for patents on behalf of the R.F. Shoup Corporation for a new voting machine that would be marketed as the Shouptronic. The Shouptronic was a full-face machine, using an array of push buttons behind a paper ballot label protected by a clear plastic sheet. As with the Microvote MV 464, the Shouptronic maintained a running vote count in its internal memory and included a printer to print the vote totals after the polls closed. The Shouptronic featured a memory cartridge similar to that used on the Optech I mark-sense ballot scanner, a machine that had come on the market only a year earlier. The cartridges of both machines used programmable read-only memory chips to hold election configuration information. Where the Optech I used battery-backed read-write memory to hold election results, the Shouptronic used a second programmable read-only memory chip.

The key property of programmable read-only memory or PROM is that once data is written to PROM, the data is difficult or impossible to erase. In contrast, data in read-write memory can be written, erased, and changed arbitrarily. In eect, the programmable read-only memory used in the Shouptronic cartridge has properties similar to the paper ballots retained by the Optech scanner or to the printed paper record of the Microvote machine. All of these machines maintained redundant but more vulnerable records in read-write memory. On the Optech machine, the read-write memory was in the memory cartridge, while on the Microvote and Shouptronic machines the read-write memory was a permanent part of the machine itself.

The Shouptronic was approved for sale in Pennsylvania in 1984, and the first sales were made that year. By 1993, 11,000 Shouptronic machines had been sold. While Boram’s basic design for the Shouptronic has survived essentially unchanged over the years, the corporation that designed the machine is long gone. In 1989, Danaher Corporation acquired Guardian Voting, which had the rights to the Shouptronic. By 1999, the machine was being marketed by Danaher Controls as the ELECTronic 1242 voting machine.

When voters enter the precinct, poll workers confirm that they are properly registered to vote. The poll worker uses an operator’s panel on the back of the machine to choose the ballot style appropriate for that voter. The voter enters the curtains (see pictures at left above) and only the races for which they are permitted to vote are activated. The voter then votes by pressing a numbered box beside each choice in each race on the ballot. Flashing lights on the left-hand side of the ballot indicate races for which the voter has not yet voted. If the voter tries to choose more than one choice in a given race (over-voting), the machine will ignore the second choice. If the voter makes a mistake, they can press the numbered box again to deselect their choice; the indicator light will go out. The voter may then select the correct choice.

When done voting, the voter presses a large green “Vote” button in the lower-right corner of the voting machine. It is very important that the voter does not push the vote-casting button until they are done voting; a vote inadvertently cast may not be redone. Once cast, the vote is recorded internally to eight internal memory locations: three banks of battery-powered RAM that reside on the machine’s central processor, two internal banks of EEPROM memory, one bank of EPROM memory and a removable memory cartridge, which contains one bank of EPROM and one bank of EEPROM memory. The vote records are stored in “vote tables” as aggregate vote tallies and also as ballot images both internally and to the removable memory cartridge.

When the polls close, the machines print out paper copies of the results and poll workers remove their memory cartridges, which contain the vote records from each machine. At this point, the cartridges are physically transported to a tabulation facility. At the tabulation facility, election officials use a cartridge reader to read the data off of the cartridges and into vote tabulation databases. The results are then combined to produce an aggregate vote tally. The printed total tapes and memory cartridges can then become part of the official record of the election.

A Shouptronic Voting Demo from Delaware 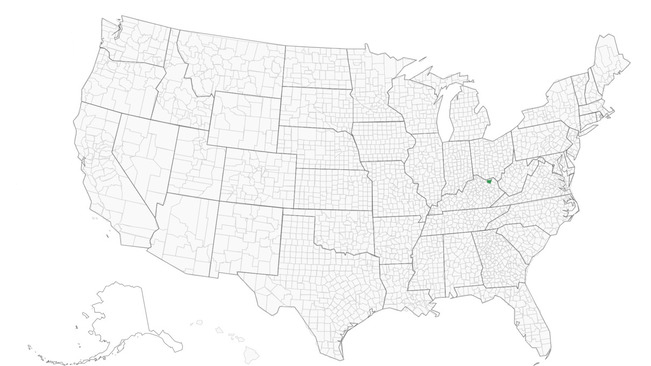 Ideally, the 1242’s exposed ports, memory card access areas and case seams would be covered with tamper-evident security seals. The integrity of these seals should be maintained at all times, and only breached under controlled, explained circumstances. Seals should be logged to maintain chain of custody of sensitive materials.

The 1242 is an older type of machine that uses a particularly sensitive and volatile type of memory (battery-backed RAM memory). Care should be taken with memory cards and they should only be handled by pollworkers and authorized election officials, then in controlled circumstances such as the opening and closing of polls.

The 1242 is a “button-matrix” DRE where the voter presses a button over which the machine’s paper ballot face is placed (under a plastic cover). A light lights up next to each selection by the voter. These buttons and lights, especially the frequently used ones in Federal races, can break or burn-out. If you see evidence of this – e.g., a light not lighting up after multiple button presses – you should request that the machine be pulled from service or that the button in question be serviced.

Some voters can be easily confused in that they press the large “VOTE” button too early or not at all. If a voter complains that they only were able to vote on the first few races, they probably pressed the “VOTE” button before they were finished voting their ballot. Unfortunately, there’s not much to be done here other than emphasize that voters should make sure that they press the “VOTE” button only after they are certain they have voted as they want to in all races on the ballot. If a voter neglects to press the “VOTE” button and leaves a valid ballot on the machine, poll workers will probably have procedures to deal with this problem. We recommend that a poll worker reach in between the curtains and simply cast this vote.

The 1242 can accommodate a number of different ballots, for different precincts, by disallowing voters to vote in contests for which they are not eligible. If a voter complains that their party (in a primary) races are not activated or that local races specific to their precinct are not activated, the poll worker probably pushed the incorrect ballot style option. The poll worker should cancel that ballot and activate the correct one.

In 1989, Danaher Corporation acquired Guardian Voting, which had the rights to the Shouptronic 1242. By 1999, the machine was being marketed by Danaher Controls as the ELECTronic 1242.