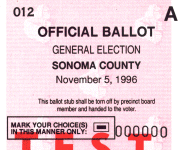 The DFM Mark-A-Vote is an optical scan paper ballot voting system that was used in three California counties for the November 2012 elections. The system consists of a ballot/card reader and BCWin, the election management software. These readers come from several different manufacturers and come in several different versions differentiated primarily by their speed. Most of the certifications for these readers date from the 1970’s. There is no firmware version associated with these readers.

The ballot consists of multiple paper cards which are voted front and back. Cards are added as required depending upon the number of contests. Voting the Mark-A-Vote ballot is accomplished at precinct locations by the use of a specially inked felt tip pen while the absentee ballot is marked by the use of a #2 pencil. Write-in voting is performed directly on the ballot card in spaces provided immediately following the other candidate names for the office. A secrecy envelope is furnished in which to place voted ballots prior to depositing in the ballot box or the absentee ballot identification envelope.

BCWin is the election management software for the Mark-A-Vote. BCWin stores its audit logs in a separate directory from the election database. The vendor mentions 6 audit logs: Card Reader Logs, Transmission Logs, Application Log, Utilities Log, Main Server Application Log, and Client Workstation Counting log. It is not clear to me exactly where these are stored. Mark-A-Vote was approved for use by the California Commission on Voting Machines and Vote Tabulating Devices in June of 1981.

The Mark-A-Vote reader requires a specific pen, which is provided by poll workers or, if a voter votes by mail, a #2 pencil. Ball point and other marking pens can not be seen by the Mark-A-Vote card reading machine; if the voter accidentally marks in pen, they must mark over pen marks with a #2 pencil. Voters may decide to vote for someone who does not appear on the ballot by “writing-in” that candidate’s name in the space provided for a particular contest.