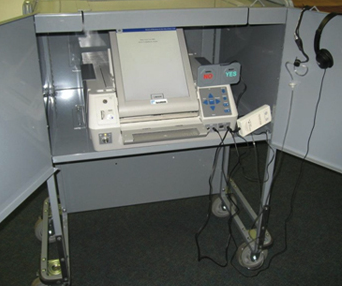 The AutoMARK Voter Assist Terminal (VAT) is an optical scan ballot marker designed for use by people who are unable to personally mark an optical scan ballot due to physical impairments or language barriers. Originally patented by Eugene Cummings in 2003 and developed by Vogue Election Systems, the AutoMARK ballot marking device received certification to the 2002 VSS in 2005 and later changed its name to AutoMARK Technical Systems. ES&S announced its purchase of AutoMARK Technical Systems on January 28, 2008. While the AutoMARK is most often used in configuration with optical scanners manufactured by ES&S, it is also used together with scanners from Sequoia and Premier/Diebold in some jurisdictions.

The AutoMARK is a hybrid of several devices: a scanner, printer, touch screen display, and input device. The data for a given election is stored on a compact flash card. Using the system software, an election official is able to convert election data created for use in the AutoMARK. During this process it is also possible to customize the election data, including adding translations or phonetic pronunciation of difficult names for use with the synthesized speech. Once the flash card has been programmed, it is inserted and locked into the AutoMARK. Secure electioneering is verified by a special program that fills in each oval on a ballot along with the candidate’s name.

Accessibility features include a touch screen with a zoom and contrast feature, multiple language translation, keypad marked with Braille, puff-sip interface as well as an audio ballot feature. The AutoMARK prevents over-voting and users are prompted visually and audibly if they attempt to under-vote. Undervoting is allowed only after the user is prompted unless otherwise required by the election jurisdiction. Before any mark is made on the ballot, the voter is shown a verification screen where each race is displayed along with their selections. Under-voted races are clearly identified by different colors on the touch screen as well as the audio ballot prompt. The AutoMARK marks the optical scan ballot for the voter including any write-ins. For voter verification purposes, the user may also re-insert their marked ballot in order to verify that their intent was accurately captured. In the event of a mis-marked ballot the voter may spoil the ballot, obtain a new ballot and restart the voting process.

When a voter inserts their ballot into the AutoMARK VAT, it searches for a match to the precinct identification code found on each ballot and used by industry standard optical scanning devices. The voter is then prompted to select the language in which they wish to vote and is able to carry out the voting process using the touch screen, a puff-sip device, or by following audio prompts along with a keypad. Additionally, there is a screen privacy option voter so that visually impaired users can be assured that their voting remains private.

During the voting process, over-voting is not allowed. The user is also prompted anytime they attempt to under-vote, and may select to continue with the under-vote or re-vote the contest in order to properly capture their intentions. Before any mark is made on the ballot, the user is shown a verification screen where each race is displayed along with the users’ selections. Under-voted races are clearly identified and the user is given the option to return and modify any race they choose.

The ballot is then printed, along with any write-ins, and returned to the user. For voter verification purposes, the user may also re-insert their ballot, after printing is complete, in order to verify that their intent was captured. If not, they may simply follow jurisdiction-specific ballot spoiling procedures and restart the voting process.

1. Insert your ballot into the machine. (NOTE: It make take up to 4 minutes for the ballot to display, a status bar will let you know how it’s going).
2. Select your language using the touchscreen.
3. Review the instructions (video and audio options available), hit Next to proceed to the ballot.
4. Make your candidate selections. Select candidates by touching their names, touch again to deselect. To vote for a write-in candidate, touch the Write-In line – a keyboard will appear. Type in the name of the candidate and touch the Record Write-In button to continue.
5. Use the Next and Back buttons to navigate if your ballot is more than one page long.
6. Once you’ve reviewed your choices, touch the Mark Ballot button.
7. When the ballot has been marked and returned to you, feed it into the precinct’s Optical Scanner/Tabulator to cast your vote.

A video demonstration prepared for 2010 elections in Toronto:

Ideally, the AutoMARK’s exposed ports, memory card access areas and case seams would be covered with tamper-evident security seals. The integrity of these seals should be maintained at all times, and only breached under controlled, explained circumstances. Seals should be logged to maintain chain of custody of sensitive materials.

The AutoMARK can often crash when the ballot is being inserted and read and results in the system hanging with the inserted ballot stuck in the feed bath. Poll workers should reboot crashed machines and perform the “Eject Ballot” operation.

he AutoMARK, especially the A100 model, can take up to 15-20 minutes to reboot. If rebooting happens often, this can severely affect voters who require the AutoMARK to cast a ballot.

Occasionally, the AutoMARK will severely damage a ballot when it ejects the ballot. Most often, this results in a ballot that cannot be fed into the corresponding optical scan reader. The ballot should be reissued and the voter should go through the AutoMARK marking process again.