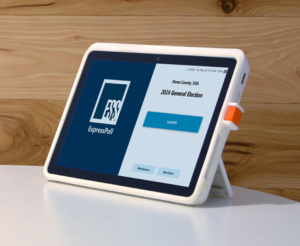 The Election Systems & Software ExpressPoll is an electronic poll book used in place of printed paper poll books to check in voters, see whether they have already received or voted a mail ballot, and can generate a particular ballot style barcode from the ExpressPass printer to be used on an ExpressVote ballot marking device (BMD) or ExpressVote XL hybrid BMD/optical scanner Voter Activation Card. The newest version of ES&S ExpressPoll software runs on commercial off-the-shelf (COTS) Microsoft Surface Go tablets, which can operate on battery power for up to 16 hours, if needed. Prior versions of the ExpressPoll (4000 and 5000) were sold by Diebold beginning in 2005 and ran Microsoft Windows software on Toshiba tablets. CE. In 2015, ES&S introduced the ExpressPoll tablet with an integrated stand, which has an internal USB hub to connect to the ExpressPass printer and a built-in infrared barcode scanner. The ExpressPoll can also be handheld and carried through a voter line or transported outside the polling place for curbside voting. In 2020, ExpressPolls are the second most widely fielded electronic poll book in the country.

ExpressPoll software holds registered voter data for a designated precinct, polling place, and county, and also includes the ES&S-provided statewide voter registration database. ExpressPolls can scan a voter’s identity document and support searching for voters by name, date of birth, or voter ID. ExpressPolls keep an audit trail record of all ballots issued and the name(s) of the poll worker(s) who completed each task, recorded with a timestamp. The audit log is stored on a non-volatile SD card and a backup copy is maintained internally and synchronized among all ExpressPoll devices networked on a LAN. If needed, an ExpressPoll tablet can be reassigned to another polling place by inputting the new polling place name or number into the login screen and entering a poll worker username and password.

Poll workers can scan the barcode on a voter’s driver license, state identity document, or voter ID card to bring up the voter’s information screen on the ExpressPoll. Poll workers can also search for voters by manually entering all or part of the voters last name, and then by entering all or part of a voter’s first name, if needed. The voter list shows active and inactive voters’ names, addresses, and dates of birth, as well as whether a voter has been issued a mail ballot or voted early. ExpressPolls can be configured to provide poll workers a variety of voter status information, including whether a voter is active, inactive, cancelled, or another custom status. When the correct voter has been identified, the poll worker selects the voter’s name from the list, and, in jurisdictions requiring a valid identity document be furnished, the poll worker is prompted to check the voter’s ID. If the voter does not have the proper identification, the poll worker can move to a declaration of reasonable impediment screen, which requires both the voter and poll worker or election judge to sign the screen.

After selecting the proper voter from the voter list, the poll worker next views the voter’s information screen, which displays basic information about the voter, including their precinct number, date of birth, political party, ballot style, and eligibility status. The poll worker can also view voter history , including the voter’s stored signature and what type of ballot was marked by a voter, and see custom instructional notes provided by the jurisdiction. If the voter is in the correct polling place, the poll worker may select one of the Issue Ballot buttons (e.g. ISSUE STANDARD) to print the voter’s particular ballot style barcode from the ExpressPass printer. A “Voter Not in Poll” notice is displayed in a voter’s record if the voter’s address is not associated within the jurisdiction in which the voter is attempting to vote. If the voter has moved within the jurisdiction, the poll worker can verify the voter’s new address or create a new voter record for the voter. If a voter is not registered and the New Voters feature is enabled on an ExpressPoll, information from a scanned identity document can be automatically entered to create a new voter record.

The poll worker next views a voter verification screen, where they can make changes if a voter has changed their voter registration information; if there has been no change, the poll worker selects None. In jurisdictions allowing electronic signatures, the voter is prompted to sign under the voter oath and select the Done Signing or Accept button. The voter may use their finger or a stylus and may clear and remake their signature, if needed. The poll worker next selects ACCEPT SIGNATURE to approve the voter’s signature, then inserts a blank activation card into the ExpressPass printer and provides it to the voter. The poll worker then selects Complete Check-in and a receipt prints from the ExpressPass printer.

On the voter search screen, the poll worker may view how many ballots have been issued and reissued in the polling place, how many voters have been checked in, and how much time remains before polls close. From the voter search screen, the poll worker can select Monitor Poll to view additional polling place information, including the device name, poll open and close times, the number of ballots and provisional ballots generated, the number of voters checked in, and the number of registered voters in the county.

When closing the polling place, the poll worker selects Monitor Poll from the voter search screen and then selects Close Poll. The poll worker then signs out and shuts down the tablet from the main screen. The poll worker removes all cords from the stand, unplugs the ExpressPass printer, and puts the equipment back in the plastic case, which absorbs shock, supports the use of wire security tags, and can be stacked for storage. 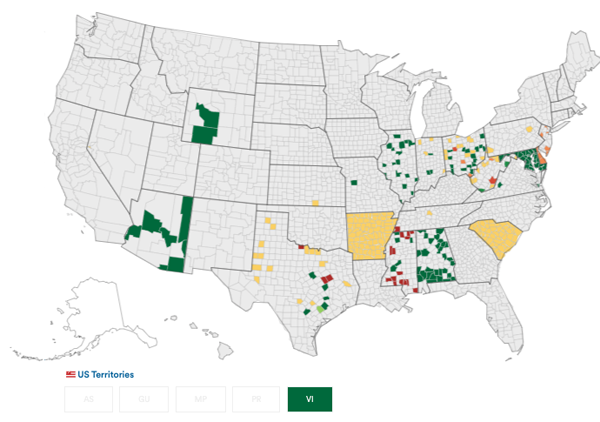 ExpressPolls can be used with the ES&S CentralPoint® web-based application to allow state election officials to monitor the statewide poll activity from one location. CentralPoint displays, monitors, and tracks polling place and voter activity information in real time, and informs election officials about ExpressPolls, including information about device battery life, software versions, and connectivity. The web-based application also provides a map showing the status of all ExpressPoll systems in use throughout a jurisdiction and can display whether an ExpressPoll device has been turned on, if it’s operating on AC or DC power, and its remaining battery life. The application can show whether an ExpressPoll tablet has been powered on before polls open or has not been turned on after polls open, and can automatically send a text or email alert to a local rover, identifying that specific ExpressPoll tablet. Multiple CentralPoint servers can be used to support more than one election during Early Voting or on Election Day.

ExpressPolls use role-based security and can assign different user access levels for system administrators, polling location supervisors, and poll workers. When a poll worker logs into an ExpressPoll, the system is in “kiosk mode,” meaning the poll worker only has access to the ExpressPoll electronic poll book software on the tablet. Election officials can remotely access ExpressPolls to protect data in case of unlawful removal of a device from a polling place.

ExpressPolls are designed to allow multiple units to be networked at a polling location to communicate, share information, and synchronize. ExpressPolls can store voter registration data for an election district, a group of election districts, a county, or an entire state. In at least three states (Georgia, Maryland, and Arkansas) the entire state voter registration database is stored on every ExpressPoll unit. All voter data stored and transmitted is encrypted using AES 256 and access can be restricted to certain users. An encryption password is required to retrieve voter data.

Each ExpressPoll device can be configured to operate in standalone mode or to communicate with other ExpressPoll devices in a polling location connected by a local-area network (LAN). All audit information and voter activity is synchronized with all other ExpressPoll units connected to the LAN. As many as 18 ExpressPoll tablets have been successfully synchronized within one polling place. ExpressPolls can also be configured to communicate with an SQL host server on a wide-area network (WAN). ES&S currently supports jurisdictions using the SQL host server system to network approximately 4,400 ExpressPoll tablets.

ExpressPolls support the capability to override the Ballot Issued status of a voter. In many jurisdictions, an election district manager must be involved in this process. After entering their own personal identification number, the election district manager or other approved party can edit a voter’s record, which may require noting the reason for the ballot re-issuance to be sent to the jurisdiction. These actions are recorded by the ExpressPoll’s audit trail and can be reviewed following each election.