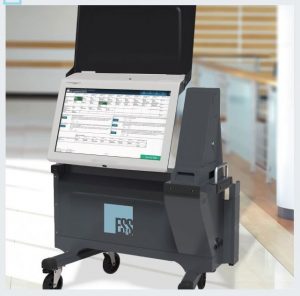 The Election Systems & Software (ES&S) ExpressVote XL is an “all-in-one” voting device that combines touchscreen voting with integrated ballot printing, scanning, and tabulation capabilities. The most unique feature of the “XL” device is a very large 32” touchscreen display, which allows presentation of dense ballot information on a single screen. For this reason, the ExpressVote XL is especially popular in jurisdictions in the Northeast US, where “full-face ballots” are customary. This all-in-one device is typically used by jurisdictions that prefer voting with a paper trail, but who want to implement a fully electronic voting experience for all voters, as an alternative to hand-marked paper ballots.

To begin the voting process the voter inserts a blank thermal paper card with the corner cut edge in the upper right into the machine. A voter’s ballot style is often encoded on the blank card during the voter check-in process, so the ExpressVote XL automatically displays the proper version of the voter’s electronic ballot. In multi-lingual jurisdictions, the voter will be prompted to select their preferred language. The ExpressVote XL can be configured with additional accessible features for voters with disabilities. Voters can adjust the text size and contrast on the screen. The ExpressVote XL also supports accessible voting through an optional tethered Audio-Tactile Interface (ATI), which is a “game controller” style console that includes tactile navigation buttons. The ATI can also support headphones for voters who are blind or visually impaired, or paddles or sip-and-puff devices for voters with dexterity impairments.

The ExpressVote XL prints thermal summary cards, which are 4.25″ wide. The summary paper record is secured inside a self-contained attached module with a clear window to allow voters to review their printed choices, meaning the paper record is not directly accessible to voters. In English, the summary card lists voters’ choice(s) in each contest (rather than all options, like a traditional format ballot). If the voter has skipped any contests, the printed card indicates “No selection.” The ExpressVote XL encodes the voter’s choices in non-human-readable bar codes and scans the bar codes to check for errors immediately after printing. After the voter reviews the printed record and is satisfied with their choices, they may select “Cast” to submit the vote. At that time, ExpressVote XL records the vote to permanent memory and drops the paper card into an attached receptacle. If at this point the voter decides to change a selection on their ballot, the voter must quit the voting session and request help from a poll worker to restart the voting process.

The ExpressVote XL tabulates the paper cards by reading the computerized bar code, not the human-readable text that the voter sees. The bar codes translate to coordinates on the corresponding paper ballot, not to the candidates’ names. When the polls close, the machine can print out the race results and other information on a paper tape (if configured to do so).

How to Use the ExpressVote XL from Union County, NJ

Demonstration of the ExpressVote XL by the Philadelphia City Commission 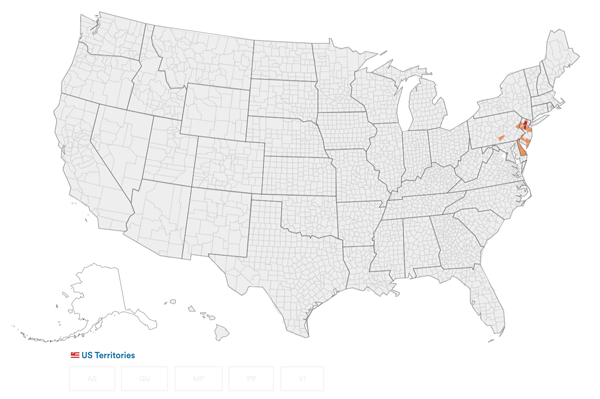 The paper vote record used by the ExpressVote shares the same physical path when the card is being printed as when it is being scanned. The printer could print on a card as it is being scanned (and counted) and could change the user’s selections. One way in which this could happen is through adding additional, or new, barcodes to the card — after it is cast by the voter. The NYSTEC Testing Oversight of ES&S EVS 6.0.4.1 Report found that, as tested in New York, the XL prints “X”s to fill in any blank spaces, thus not allowing new barcodes to be added. However, if the printer can be hacked to add barcodes, it can be hacked not to print “X”s.