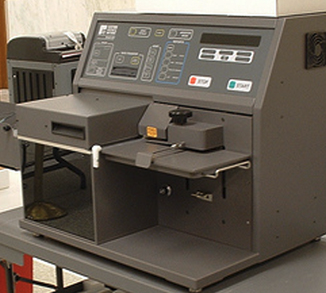 Election Systems and Software has produced several high speed optical scanners of which three models are currently fielded in US jurisdictions: Models 150, 550, and 650. The different models differ in speed; the 150 is slower, suitable for small counties and for processing absentee ballots that have been folded for mailing, while the 550 and 650 are faster, more appropriate for large counties. The most common high speed scanner in use in ES&S jurisdictions today is the Model 650. They are used exclusively for central counting ballots, either absentee ballots or ballots deposited by voters into polling place ballot boxes. In use, ballots to be counted are loaded on the tray to the right and then they are automatically fed through the reader mechanism and ejected into the output tray on the left. The scanner includes, within its body, a complete computer system, and it sits on a wheeled cart that also holds a printer and supplies.

Election workers program the Model 650 scanner for a specific election with an election definition from a Zip disk. After the polls close, poll workers transport ballots to a central count location where election officials scan the ballots. The Model 650 prints a continuous audit log to a dedicated audit log printer and can print results reports directly from the scanner to a second connected printer. The scanner saves results to a Zip disk that officials can use to format and print results from a PC running Election Reporting Manager. The Model 650 uses an OKI compatible dot matrix printer with a standard parallel input to print reports. In addition to the report printer, the M650 supports an additional audit printer. The scanner stops if either printer fails. If one printer fails, the audit log automatically switches to the working printer.

1. A poll worker will issue a paper ballot and direct you to a voting booth.
2. To select your candidate, use a pen to fill in the oval beside the candidate’s name you wish to choose.
3. After completing your ballot, check over each race to make sure you have marked the ballot as you intended. If you make a mistake, simply ask the poll worker for another ballot.
4. When finished making your choices, place your ballot in the ballot box. All ballots in your county will be counted at a central location after the polls close. Because your ballot is counted after you leave the polling place, you will not be alerted of any over-votes or under-votes.

IMPORTANT
Over-Votes: If a voter casts votes for more than the allowable number of candidates in a contest or cast votes for and against an issue in a contest. Over-voted races cannot be counted. In jurisdiction using a central count voting method there is no way for a voter to be notified of an overvote so be very careful to vote for only the allowable number of candidates in any contest (in most cases one). If you do accidentally over-vote and you have not put your ballot into the ballot box, you can request a new ballot from an election official. You will be asked to sign a Spoiled Ballot Affidavit. You may “spoil” up to two ballots and receive another (three ballots total). Once you drop your ballot in the ballot box, no changes can be made.

Robert Urosevich and his brother Todd, an IBM salesman, formed Data Mark Systems to act as the marketing, sales, and service agent for the new Westinghouse ballot scanners, which were essentially standard test scanning machines. To demonstrate the capabilities of their new system, Westinghouse created the Scan-A-Van, a truck loaded with several of their scanners and the mini-computer needed to run them. The new system saw its rst test during the May 11, 1976 primary in Douglas County, Nebraska, under the glare of television lights. The test was deemed a success, and Douglas County became the first Data Mark customer. That November, Douglas County ballots were counted on three W600B scanners interfaced to a Hewlett-Packard 2100-series minicomputer and a line printer.

The W600B scanner could handle 600 pages per hour, and it had an automatic sorting mechanism that placed scanned pages into one of three output hoppers. Ballots that scanned normally went into a large hopper, while ballots containing write-in votes, timing and index marks in abnormal places, or overvotes were sorted into two smaller hoppers. In the central-count context, the ability to read ballots from many different precincts was important. Westinghouse understood this from the start, and designed ballots with a pair of code-tracks along the left edge that could be used to encode information such as precinct numbers. In effect, the code tracks were long skinny bar codes designed to be read by exactly the same kind of read heads that were used to read the votes on the ballots.

Even with their public success, sales of the Data Mark system were slow. Although they obtained California certification in 1976, their only customers four years later were Douglas and Sarpy Counties in Nebraska and Jefferson County, Missouri. Rock Island, Illinois, which used a Westinghouse ballot scanner for about six elections in 1981 and 1982, dealt directly with Westinghouse instead of going through Data Mark. From the corporate perspective of a large company like Westinghouse, educational testing was a small business, and ballot scanners were insignificant. With no immediate prospect of significant return on investment, there was little reason for Westinghouse to remain in the market.

AIS/ES&S Model 550For a small startup like Data Mark Systems, the story was quite different. Ballot scanners were their only business, and the lack of support from Westinghouse was frustrating. As Westinghouse backed out of the business, the Urosevich brothers and several key Westinghouse staffers formed a new company named American Information Systems to pursue the ballot scanner market. Their first product was the eccentrically numbered AIS 315 ballot scanner. The AIS 315 was developed largely by Jim Lane, a former Westinghouse employee. The 315 was in many ways a simplied successor to the W600 scanner. Weighing just under 300 pounds, the AIS 315 was the size of a small photocopier and designed to sit on a tabletop or on a heavy-wheeled cart. It could handle two-sided ballots printed on 80-pound legal-sized paper. The smaller and slower AIS 115 followed quickly in the marketplace.

AIS ballot scanners were certied for use in Ohio in 1982, New Jersey in 1983, Kansas in 1984, and Washington in 1985. These scanners and their successors have proven very durable. In Mississippi, for example, 12 counties purchased AIS scanners in 1987 and 1988 that were still in use in 2000. The ES&S Model 650 scanner shown at the top of the page is typical of the AIS family of scanners. This scanner is the direct descendant of the AIS 550 and the earlier 315. It uses essentially the same mechanism, but with updated electronics. Unlike the Westinghouse scanner with its multiple output hoppers, the AIS scanners feature extremely simple paper paths. When the scanner detects a misfeed or a ballot containing an overvote or a write-in vote it simply halts, displaying an explanation for the operator. It is up to the operator to pick up the problem ballot and deal with it appropriately.

A Voting Demo from Arkansas

A Video of the M650 tabulation process from Oregon