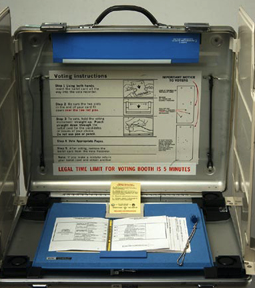 The Votomatic was the last punch card voting system used in American elections. They were last used in 2 counties in Idaho in the 2014 General Election. Punchcard systems employ a card (or cards) and a small clipboard-sized device for recording votes. The Votomatic uses a standard-size IBM data processing card as a machine-readable ballot. There are a maximum of 960 ballot positions in 12 columns across the face of the card. The Votomatic ballot is pre-scored at each voting position so that punching with a stylus through that position into an appropriate backing will remove a rectangle of chad, leaving a hole that is counted as a vote. The backing used inside the Votomatic machine is a complex structure of elastomeric strips, and the stylus has a relatively comfortable handle on it. When used for absentee voting, a disposable styrofoam sheet is generally used as backing, and in some jurisdictions, the stylus for absentee ballots is an unbent paperclip.

Candidate names are not printed on the card but rather on the pages of the ballot holder, corresponding to the positions of the inserted card. A hole constitutes a vote for the candidate or referendum issue assigned to that position. With the Votomatic card, the locations at which holes may be punched to indicate votes are each assigned numbers. The number of the hole is the only information printed on the card. The list of candidates or ballot issue choices and directions for punching the corresponding holes are printed in a separate booklet.

The voter slips the ballot card into the holder and turns the pages exposing columns of ballot positions from left to right across the underlying card. When in the holder, the card is actually sandwiched between a plastic template with beveled holes to help center the stylus on the target position, and below the card, a system of slotted rubber strips through which chad are punched. Chad removed from the ballot card fall into a hollow part of the ballot holder.

After voting, the voter removes the ballot card from the ballot holder. The ballot may be tabulated with a card counter in the polling place, or collected and tabulated in a central location using card readers and attached computers. The reader senses which position on the ballot card have holes. These locations are reported to the software of the computer that summarizes the number of votes for each candidate.

Over-Votes: If a voter casts votes for more than the allowable number of candidates in a contest or cast votes for and against an issue in a contest. Over-voted races cannot be counted. In jurisdiction using a central count voting method there is no way for a voter to be notified of an overvote so be very careful to vote for only the allowable number of candidates in any contest (in most cases one). If you do accidentally over-vote and you have not put your ballot into the ballot box, you can request a new ballot from an election official. You will be asked to sign a Spoiled Ballot Affidavit. You may “spoil” up to two ballots and receive another (three ballots total). Once you drop your ballot in the ballot box, no changes can be made.

The standard punched card, originally invented by Herman Hollerith, was first used for vital statistics tabulation by the Baltimore Board of Health. After this trial use, punched cards were adopted for use in the 1890 census. Hollerith wasn’t working in a vacuum. His idea for using punched cards for data processing came after he’d seen the punched cards used to control Jaquard looms. IBM developed pre-scored punched cards and the Port-A-Punch card punch (left). In the early 1960’s, two professors at the University of California at Berkeley adapted this for voting. Joseph P. Harris, from the political science department, had the idea, and sought help from William Rouverol, of the mechanical engineering department. They made several improvements to the Port-A-Punch, patented them, and formed Harris Votomatic, Inc. to sell the result. After a large-scale trial at the Oregon State Fair, the system was used in primaries in Fulton and DeKalb Counties, Georgia; By the general election that fall, several counties in Oregon and California had moved to this new technology, and things looked promising enough that, in 1965, IBM bought the company.

The Portapunch was a pocket-sized handheld device that allowed a worker in the eld to record data directly onto pre-scored punched cards by pressing a stylus through holes in a template over the card. With no moving parts, aside from the handheld stylus and the resilient rubber backing strips behind the card, Portapunches cost only a few dollars each. When a student called Joseph Harris’s attention to the Portapunch, he very quickly saw the possibility of adapting it to voting. At the time, Harris was on the faculty of the University of California at Berkeley. Working with William Rouverol, a mechanical engineering professor, Harris transformed the Portapunch into what became the Votomatic. Harris received his rst Votomatic patent in 1965, and a patent on a refined machine in 1966.

In converting the Portapunch into a voting system, Harris and Rouverol incorporated the mechanism that had been a hand-held clerical device into the table-top of a lightweight voting booth, added a registration system to help align the ballot card for punching, and, most signicantly, developed a way to pack the text of a complete general election onto a label that would t over IBM’s standard 3 1/4 by 7 3/8 inch punched card ballot. The trick was to arrange the ballot label as a booklet. Opening the booklet to any page exposed one of the 12 columns of the punched card in the space between two pages of the booklet. Those two pages could then be used to describe up to 40 punching positions in that column, although most ballots used far fewer than this maximum.

The Votomatic had three things going for it. First, it was cheap. Lever voting machines could cost thousands of dollars, but IBM sold the injection-molded Votomatic for only $185 in 1965. It was inexpensive to store and transport as well. Lever voting machines could weigh close to a half ton, but a Votomatic machine weighed only 6 pounds. The second advantage was one of technology. Voting on punched cards brought elections into the computer era. Unlike lever voting machines, if there was doubt about the integrity of an election, the ballots could be recounted. Ballots were separate, so there was no record of the order in which votes were cast, and vote counting was done by fast objective machinery, so ballot handling was minimized. To many observers in the 1960s and 1970s, the Votomatic system really did appear to be close to ideal.

With its high-tech appeal and low price, the Votomatic became the single most widely used voting system in the United States. Several states adopted the system statewide, among them Illinois, and it was very popular in large urban areas such as Miami and Los Angeles. By 1980, over 29% of U.S. voters were voting on Votomatic-style punched-card ballots, using systems provided by almost a dozen vendors. By 1992, the Votomatic system was the dominant voting system in the United States, used by 27% more voters than used mechanical lever voting machines. By this time, newer electronic voting technologies were becoming strong competitors, but they represented a much smaller market share.

A noteworthy consequence of the shift from lever machines to the Votomatic system was a shift from precinct-count to central-count ballot tabulation. With lever machines, the totals for each precinct could be announced and recorded by election observers at the precinct immediately after the polls closed, while with the Votomatic, no results were known until the ballots had been transported to the counting center and tabulated.

The public outcry after the election of 2000 led Florida and several other states to abandon Votomatic technology, but it remained in use in Ohio, Illinois and several other states until the Help America Vote Act of 2002 (HAVA) effectively banned pre-scored punched card ballots. As we discuss in Chapter 6, HAVA was passed after serious problems with newer electronic voting systems cropped up in Florida’s August 2002 primaries. Among other things, HAVA gave the states 4 years to replace all lever and punched-card voting machines with newer equipment.