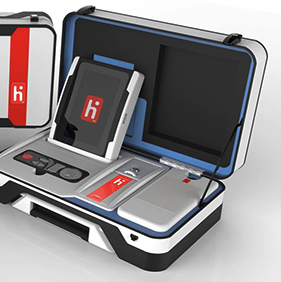 The Verity Scan is a digital scan ballot tabulator that is used in conjunction with an external ballot box. The unit is designed to scan marked paper ballots, interpret and record voter marks on the paper ballot and deposit the ballots into the secure ballot box. Verity 1.0 allows for entering write-in candidates on the fly or selecting from a list of certified write-ins. Additionally, write-ins do not have to be processed prior to tabulation. In the event that the county determines write-ins need to be processed individually, they can be processed in the tabulation system.

Verity Central is a high-speed, central digital ballot scanning system used for high volume processing of ballots (such as vote by mail). The unit is based on COTS scanning hardware coupled with the custom Hart developed ballot processing application software. Verity Central allows for ballots to be scanned in bulk for users to review during scanning and through resolution for voter intent. Each ballot has the front and back pages scanned simultaneously to capture all voter marks, supporting duplex ballots. Users with proper training can review the ballots for write-ins and ballots flagged as having voter intent issues (such as overvotes, undervotes, and write-in candidates). Once all votes have been reviewed as indicated by flagging, the ballots are then written as Cast Vote Records (CVRs) to vDrives. The final CVR records on Verity vDrives are then sent to a Verity Count workstation for official tabulation.

1. After registration, take your ballot from the poll worker to the voting booth.
2. Make your selections by completely filling in oval next to the candidate’s name with the pen provided. Make sure not to over-vote.
3. For write in candidates, fill in the oval next to Write-in and write the candidate’s name there.
4. Review your selections for accuracy and completeness; you can ask a poll worker for a new ballot if you make a mistake.
5. Feed your ballot into the Optical Scanner/Tabulator to cast your vote. If you have mis-voted, the machine will return the ballot for review.

Hart entered the elections industry in 1912, printing ballots for Texas counties. The company, formerly a division of Hart Graphics, Inc., was established as a subsidiary called Hart Forms & Services in 1989, which, in 1995, changed its name to Hart Information Services, Inc. During the next five years, Hart Information Services acquired three election services providers: Texas County Printing & Services, Computer Link Corporation, and Worldwide Election Systems. Worldwide was the developer of the eSlate, Hart’s direct recording electronic (DRE) voting solution. In 1999, the company spun off completely from Hart Graphics and in 2000, the company became Hart InterCivic Inc.

Verity Voting 1.0 Test Report for the State of Colorado (2015)
Report of the Secretary of State of Washington on the Examination of the Verity 1.0 Voting System (2015)