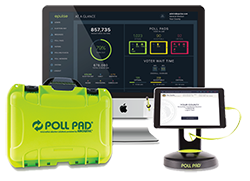 KNOWiNK’s Poll Pad is the most widely used electronic poll pook in 2020. Poll Pads are used in place of paper poll books to check in voters, see whether they have already received or voted a mail ballot, and direct them to their correct polling place if they are in the wrong location. The Poll Pad software runs on commercial off-the-shelf (COTS) Apple iPad tablets. The tablet is connected to its base by an AI Data stand arm, which allows the tablet to be swiveled to face the poll worker or voter. The Poll Pad application supports English, Spanish, and French languages. In jurisdictions that require voter identification to be checked at polling places, the built-in iPad camera can be used to scan a voter’s identification.

The Poll Pad setup includes a COTS Star Micronics thermal receipt printer via bluetooth. Depending on the jurisdiction, the printout may be the voter oath, which is signed by the voter, or may be a simple receipt showing the voter’s name, address, ballot type, and other pertinent information. The Poll Pad comes equipped with two AI Data styluses, one of which is used by poll workers to enter a voter’s name, date of birth, and to make selections. The other stylus can be used by voters to mark their signatures on the Poll Pad, if the jurisdiction allows it.

KNOWiNK offers election management tools that allow jurisdictions to see voter turnout in near real-time, monitor the status of Poll Pads, and remotely lock or disable a Poll Pad if there is a security issue at a polling place. All Poll Pads connect to ePulse, KNOWiNK’s web-based monitoring platform, via WiFi or cellular connectivity, which is built in to the Apple iPads and which is supplemented by Cisco Meraki and Novatel products. ePulse allows election administrators to remotely oversee the operation of Poll Pads, which includes viewing device battery life, average check-in times, and number of ballots issued or spoiled. With this live connection, election officials are able to directly contact poll workers via video or text message. Video chat is built in to the Poll Pad application and customizable and pre-written messages can be sent between ePulse and Poll Pads.

When opening the polling place, poll workers set up the iPad tablets on their stands and turn on the devices. KNOWiNK recommends a minimum of two square feet is per electronic poll book, with two Poll Pads per six-foot table. The Poll Pad software application launches automatically to show the jurisdiction’s home screen, which displays the election name, date, polling location, and precinct, as well as the number of precinct records, which is the number of voters in the precinct, and the check-in count, which should be zero at the start of the day. The screen also displays the countywide records, which is the number of voters in the entire county, if there is more than one polling place in the county. KNOWiNK recommends that poll workers also ensure that the printer is connected and that the battery life of the tablet is above 90% before selecting GET STARTED to begin processing voters.

To process a voter in a jurisdiction that does not check voter identification documents, the poll worker enters the voter’s full first and last name or the first three letters of first and last name. Search results appear as a list of voters, which includes registered voters, inactive voters, and voters who have already voted by mail. The list displays each voter’s full name, date of birth, address, voter ID, and precinct location. Poll workers can also search by a voter’s date of birth or street address.

In jurisdictions that require verification of a voter’s identity document, poll workers can scan the ID’s barcode using the tablet’s built-in camera. To do this, the poll worker places the ID in the ID tray with the barcode facing the camera and selects SCAN BARCODE. The voter’s information then appears on the Poll Pad just as if the poll worker had searched by the voter’s name.

In jurisdictions that allow signatures on electronic poll books, the voter’s signature screen next appears. The voter can listen to or read the voter oath to affirm that they live at the address presented to them and are eligible to vote in that election. The voter can use the stylus to sign the tablet and can clear their signature and remake it if needed. When done signing, the voter selects DONE SIGNING and the poll worker can swivel the tablet back to confirm the voter’s ballot type and preferred method of voting (e.g. paper ballot or BMD). The poll worker then selects SUBMIT and prints receipts for the voter and election office. If the jurisdiction requires a wet signature, the poll worker’s selection of ACCEPT on the voter’s information screen prompts the printer to print out a signature and ballot receipt, displaying the voter oath, which the voter then signs.

When a voter has already been issued a mail ballot or absentee ballot, the Poll Pad will show this on the voter list. In mail ballot jurisdictions, “Mail Ballot Issued” will appear on the voter list and the individual voter’s information page, while in jurisdictions that send absentee ballots only to voters who request them, the note “AB” may appear next to a voter’s name. Depending on the jurisdiction, the poll worker can select CANCEL MAIL BALLOT, can change the voter’s address or party, or may select INCORRECT MAILING ADDRESS, and have the voter complete the appropriate forms. If the voter’s voted mail ballot has already been returned, the poll worker will see that the voter has done so and inform the voter. The voter may then be allowed to vote a provisional ballot.

The Poll Pads may need to be left on for a time after the polls have closed to update information with the elections office. Poll workers can then put the Poll Pads to sleep, remove them from the stands, and pack up the other equipment. Each Poll Pad unit is equipped with a waterproof and shockproof Nanuk case, which may be locked or furnished with a tamper-evident seal, and stacked for storage. 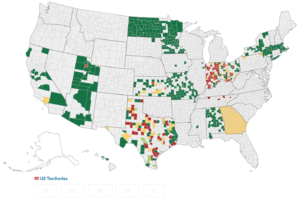 Poll Pads encrypt voter registration data at rest and while in transit, utilizing a minimum of Advanced Encryption Standard (AES) 256-bit data encryption. However, the Poll Pad application has the capability to store a voter’s driver license number, Social Security Number (SSN), or portions thereof. This voter data is supplied to Poll Pads during import of voter files from the jurisdiction’s election management system. California code prohibits this information from being stored on electronic poll books and, according to the California Secretary of State’s Staff Report on Version 2.5.0 of the Poll Pad, driver license numbers and SSNs were excluded from voter file imports.

KNOWiNK has stated that poll workers cannot leave the Poll Pad application without a password, which prevents line slowdowns. However, an April 2020 report produced by Los Angeles County after its primary election cited KNOWiNK Poll Pads as the likely source of some long lines. Some Poll Pads took hours to sync voter lists, a result of not all of the Poll Pads not being used during early voting. The Poll Pads that were not used prior to Election Day took hours to sync when powerd up, during which time these devices were unavailable. The Poll Pads were also configured to alert poll workers to provide voters with provisional ballots when synchronization exceeded 15 minutes. Poll workers were also unable to look up voters by address, a function the county had requested and expected. Poll Pads are programmed and serviced by KNOWiNK, meaning software failures on Election Day require election officials to contact the vendor for support. On Election Day in the Coweta County, Georgia 2020 primary election, voters were told that only one Poll Pad was working due to an uninterruptible power source being turned off and the inability of elections staff to reprogram working Poll Pads to replace those malfunctioning in certain precincts.

KNOWiNK regularly makes software changes to the Poll Pad application to ensure that it is compatible with the latest version of Apple iOS. The KNOWiNK User Guide for Poll Pad Version 2.0 prepared for the State of California advises poll workers and election officials not to perform a software update on the iPads. If a user receives an iOS update prompt, the User Guide advises selecting “Later” from the list of on-screen options before pressing the Home button to keep the Poll Pad app open and then contacting Technical Support. Software that is not updated is more vulnerable to malware and hacker exploitation. The Cybersecurity and Infrastructure Security Agency (CISA) advises that the most effective measure software users can take to protect their digital devices is to keep software up-to-date.

KNOWiNK is a Limited Liability Corporation that was founded in 2011 by Scott Leiendecker, a former Election Director for the City of St. Louis. In addition to the Poll Pad, the company has also developed ePulse, a web-based election management back-end system, iTrack, a tool for assigning and tracking incident reports, Tally Live, and Poll Print, a ballot on-demand system. In 2015, KNOWiNK acquired Election Administrators, the creator of the EA Pollbook and EA Tablet, electronic poll book systems which have been phased out of use.