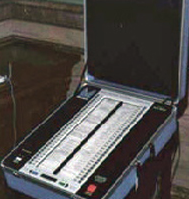 The Microvote MV-464 represents an older generation of direct recording electronic voting machines that uses push-buttons adjacent to each ballot item to cast votes, with a light by each button giving positive feedback that the vote has been registered. The ballot issues are printed on a paper ballot label that is protected behind a window between the rows of buttons, and the machine itself opens up and assembles into a voting booth, just as the classic lever machines did – the side privacy panels of the machine in the photo were folded into the lid at the time, in order to allow greater visibility during a demonstration of the machine.

The Microvote machine has only 64 buttons, and many elections would require significantly more than this if the full ballot were to be displayed at once. Microvote has a patented “ballot paging system” that allows a ballot with up to 512 candidates or positions on issues to be divided into 8 pages for presentation. The ballot label is printed on a single scroll, with the pages printed side-by-side, and the machine contains a motor drive that advances the scroll to the left or right as the voter works through the issues on the ballot.

In 1985, William Carson of Indianapolis led for a patent on an electronic voting machine built by Carson Manufacturing Company and marketed by a new company, Microvote General Corporation of Carmel, Indiana. Carson’s MV-464 voting machine featured a display window with a row of 32 push buttons on each side. The ballot displayed on the window was printed on paper. For small elections involving fewer than 64 candidates, a single page behind the window would have sufficed. But because general elections are frequently quite complex, the paper was mounted on rollers, one under each column of push buttons, so that the paper could be scrolled from side to side to display successive pages of ballot issues.

Most previous direct-recording voting systems shared a common weakness: The vote total for each candidate was stored in just one place, either a mechanical counter or a memory location in a computer. Any failure in that storage mechanism meant that the corresponding vote record would be lost. The MV-464 addressed this weakness by storing vote records redundantly, one copy in an electronic record, and another copy printed on a roll of adding-machine tape inside the machine. In the event of any question about the integrity of the electronic records in the machine, the paper record could be recounted by hand.

Carson was aware of the threat to voter privacy resulting from printing votes sequentially, so he randomized somewhat the order of printing. The machine did not print any vote records until 4 records had been accumulated. From this point on, each time a voter used the machine, it printed one of the 4 records in its memory, selected at random.” The exact mechanism used for randomization was not disclosed, but even weak randomization oers greater ballot secrecy than simple sequential recording. The price for the randomization was that in the event of a failure in the electronics, the last 4 votes cast would be lost.

MicroVote General Corporation, founded in 1982, is the longest continuously operated voting system manufacturer in the USA.