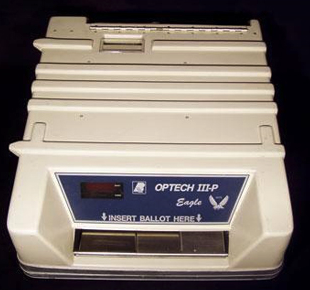 The Optech IIIP Eagle originally made by Business Records Corporation and later (as a result of merger and an antitrust decision, see below) by both Sequoia Voting Systems and by Election Systems and Software. (In jurisdictions with maintenance contracts with ES&S the equipment is often called the Optech 3P Eagle.) The Optech IIIP Eagle consists of two major parts, the ballot box (blue) and the head (white). The box is just that, a secure container for the ballots the machine has counted, while the head contains the scanner and electronics. The ballot box on the Eagle and most other precinct-count ballot tabulating machines contains three compartments. One compartment holds ballots that were not scanned by the machine. This compartment is considered an emergency feature; it is intended that it be used only if the scanner does not work, and in normal use, it is sealed shut. After the polls are closed, any ballots deposited in this compartment are typically fed through a working scanner by the precinct election workers or they are subject to a hand count.

1. After you check in at the polling place, a poll worker will give you a paper ballot, which you will mark with a pen or pencil. Be sure to verify with the poll worker that you are using the correct pen for the machine used in your polling place.

2. Mark your choices on the ballot by completing the arrow next to your candidate’s name or selection. Follow the directions carefully to be sure your mark will count.

5. When done voting, take the ballot to the scanning machine and insert it face up. If you have voted for more candidates for a race than can be elected (“over voted”), the machine may reject your ballot and will offer you the opportunity to correct your mistake. You may choose to submit your ballot as is, or correct the over-vote by marking a new ballot. (If you submit as is, your votes will be counted for all races except the over-voted race.)

6. If the scanner is not working, your ballot will be secured to be scanned later.

In 1985, CESI was acquired by Texas-based Cronus Industries, Inc., and folded into their voting equipment subsidiary, Business Records Corporation (BRC). The Optech precinct-count systems were quickly certified across the country, and some election officials even used them as central count systems, primarily for absentee ballots. Cronus spun off BRC in 1990. While BRC continued to develop the Optech line, James Narey briefly flirted with launching a competing product, the Megascan. The Megascan had two important new features that improved the usability of ballot formats. One was a system of markings that allowed the scanner to operate correctly, no matter how the ballot was inserted into the machine. This made it much easier for voters to insert their own ballots directly into the scanner.

The second feature was a new form of self-clocking voting target along with new marking instructions. Earlier mark-sense forms had used index marks along the edge to identify the locations of the voting targets. The self-clocking target used two closely-spaced index marks with a gap between them. Each pair of index marks was printed in the form of a broken arrow pointing to a candidate’s name, and voters are instructed to “connect the arrow” in order to vote for a particular candidate. Connecting the index marks with a straight line darkens the target region between them, exactly where the scanner looks for votes.

This new form of target had several advantages. First, it encouraged the voter to use a horizontal line connecting the head and tail of the arrow. A scanner that moves the page vertically is more likely to sense a horizontal line than other marks. Second, placing the timing marks adjacent to the target reduced the system’s sensitivity to paper shrinkage and small printing misalignments. Of course, with millions of people trained by various educational tests to \ll in the bubble,” this new target design posed human-factors problems simply by being different. Well written instructions should have eliminated such problems, but poor explanations are common on all government forms, including ballots.

By 1989, when the U.S. government issued a patent for Narey’s new ballot arrangement, he had sold the Megascan idea to BRC. It appears that the BRC Optech III scanner was, for all intents and purposes, the Megascan. BRC understood that large jurisdictions which used precinct-count scanners also needed central-count scanners to process absentee ballots, so they developed the Optech IV-C high-speed central-count scanner. The Optech IV-C patent, granted in 1993, clearly states the value of scanning mark-sense voting targets with visible light instead of the infrared light used by most earlier scanners.

In late 1996, BRC agreed to sell its election business to AIS, which was by then the dominant manufacturer of central-count mark-sense voting systems. The Antitrust Division of the U.S. Department of Justice intervened, delaying the merger while they found a way to prevent the merged companies from forming an effective monopoly. The merger was finalized in 1997 after BRC sold the rights to the technology behind the Optech line of scanners to another vendor, Sequoia Pacific Systems. After this sale, the merged companies were reorganized as Election Systems and Software (ES&S). As a result of the agreement with the Justice Department, both ES&S and Sequoia supported the Optech scanner line, although Sequoia changed the product names to the Optech 300-P and Optech 400-C. Aside from the name change, the ES&S and Sequoia systems were essentially identical. ES&S, however, continued development of their own precinct-count scanner (Model 100), because they were forbidden to sell Optech scanners to new customers by their agreement with the Justice Department.