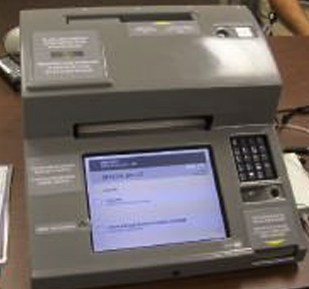 The internal components and software of the PopulexSlate are all COTS products: ballot and report printing are performed by the Lexmark Z605 (or Z615) inkjet printer housed inside the PopulexSlate, the core of the PopulexSlate is a Compaq TC1100 tablet PC, which serves as the central processing unit of the PopulexSlate, as well as the touchscreen interface with which the users interact. The TC1100 is a fully functioning personal computer, featuring a removable 20 Mb hard drive, as well as USB, infrared and Ethernet ports. The TC1100 includes a built-in wireless network interface, although the vendor states that the units are manufactured and shipped with this interface disabled. The PC is attached to the PopulexSlate chassis and held in position by Velcro. The PopulexSlate’s TC1100 runs on a version of the Microsoft Windows XP Tablet PC edition operating system. The PopulexSlate’s application software, Polling Place Functions (PPF), runs as a shell if the user logs onto the operating system using the standard operator password. This shell is reasonably restrictive and appears to confine the user to the PPF application, unless the user shuts down and restarts the TC1100. The alternate administrative password provides full access to the TC1100 PC, including: Full read/write access to the hard drive, with sufficient permissions to install executable files; full access to the Windows control access, including permission to modify & reset passwords; and Administrative access to enable or disable operating system services.

Once a new voter has been verified as eligible to vote, a poll worker programs an Election Key (smart card) for the voter on a Judge’s Check-In Station. This key contains the ballot style and party information for that voter, as well as the accessibility support required for the voter. The voter is given the Election Key and a blank ballot. The voter then inserts the Election Key into a Voting Station to activate the station and vote his or her ballot. The voter marks their selections on the PopulexSlate touchscreen using the pen provided. When the voter is done, the ballot is printed with the voter’s vote choices. The PopulexSlate’s interface prevents over-voting and provides warning for under-voting.

The PopulexSlate provides an audio ballot mode for accessibility. The voter may take the ballot to a verification station and scan the bar code on the ballot to have the ballot’s vote choices displayed or read back to the voter. Alternatively, the voter may verify the ballot by looking up the plain text “punch codes” on the ballot against a print-out that translates those punch codes to actual candidate names and ballot measure choices.

Once the voter is satisfied that the ballot accurately reflect his or her vote choices, the voter can go to a Ballot Counting Station and scan the ballot before dropping it into the ballot box. Alternatively, the ballot can simply be deposited into a ballot box for later tabulation.

The PopulexSlate’s housing or cover is a heavy-duty molded plastic. There is no built-in physical lock to secure the housing. Instead, the housing is secured by a small metal tab on the chassis that extends through a slot in the cover. This metal tab has a small hole through which a small lock (such as a luggage lock) or a tamper-evident seal can be placed. While this mechanism appears insufficient and fairly easy to circumnavigate to access the internal components of the PopulexSlate, it may be sufficient to make such unauthorized access detectable. Further, the design of most modern voting equipment provides differentiated levels of physical access. For instance, memory ports or poll worker controls can be accessed through separate locked access doors, without providing full physical access to the rest of the hardware components. With the Populex PopulexSlate, no such differentiation on physical access is provided – it is all or nothing. The cover must be fully opened for maintenance tasks such as installing the election definition and programming, replacing the printer ink cartridge, or resetting the printer paper guides, exposing every internal component of the device.

From the California Secretary of State’s Staff Review of the Populex Voting System (2006): All ballot styles are available on the Judge’s Check-In Station for creating Election Keys, thereby increasing risk of incorrect ballot style assignment to a voter. As noted previously, the PopulexSlate is always programmed with the entire election definition and all ballot styles. Unlike most voting systems, the PopulexSlate cannot be locked down to a specific set of ballot styles for the assigned precinct. Because the poll worker must identify the precinct/ballot style for each voter Election Key, there is a significant risk of choosing the wrong ballot style.

Manual, visual verification of the ballot is complex. Some voters may not trust the PopulexSlate verification system, since it is essentially the same system that recorded their vote choices and printed the ballot. The clear text printed portion of the ballot only lists “punch numbers”. A separate printed reference is necessary to translate these numbers into contests, candidates and ballot measure choices. While the Populex EMS application does feature a “punch number report” for cross-references, the vendor acknowledges that the report is not in a voter-friendly format.. It is incumbent on the jurisdiction to reformat and print this data in a manner that is usable by the voter. Although the vendor suggests that this cross-reference information should be posted in the voting booth, it is questionable whether there is enough room to accommodate all the various lists that would be required, particularly in a primary election with multiple political parties and in polling places that integrate multiple precincts.

The Populex touch screen cannot be blanked for blind voters to protect their votes from being observed. Unlike many voting systems, the PopulexSlate does not provide the blind voter with the option to blank the display screen. Consequently, it is possible for someone to observe the blind voter’s ballot choices unbeknownst to the voter.

Nothing prevents a voter or poll worker from double-tabulating a Populex ballot. As originally designed, each Populex ballot in this voting system contained a unique ballot identification number to prevent a ballot from being scanned and counted multiple times. The State of California has determined that the unique ballot identification number is prohibited by State law, and the vendor has subsequently removed that number from the ballot for the California version of the system. Unfortunately, that puts this voting system at risk for accidental or intentional mis-tabulation of the vote results. Most voting systems prevent double scanning of ballots (or at least make it extremely difficult to do so), by physically capturing custody of the ballot as it is scanned. In the system configuration where the voters scan their ballots throughout Election Day, the voter must hold the ballot under a bar code scanner and then manually drop the ballot into a ballot box. Nothing prevents the voter (or a poll worker) from scanning a ballot more than once. While basic ballot accounting can inhibit this, such accounting would be fairly simple to circumnavigate. For example, a poll worker could double-scan a ballot that contains the punch code of a particular candidate and then, later, drop an adverse ballot into the ballot box without scanning to keep the ballots cast counts balanced. For this reason, tabulation must not be done by voters and poll workers throughout the day.

Sanford Morganstein filed for a ballot-marking device patent in 2003 and founded Populex Corporation to commercialize the system, and by 2004, the system was brought to market. Morganstein’s system never achieved deep market penetration, although it is still used in Worth County, Missouri.