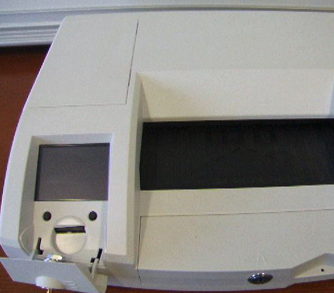 The Accuvote OSX is a precinct and central accumulation digital scan voting system. When using the Accuvote OSX as a precinct based digital scan unit, ballots are processed in the polling place, not transported to a central location. Only the voter touches the ballot between the time it is cast and the time it is counted. The Accuvote-OSX integrates the vote tabulation and recording process into one unit. The unit is powered with both an internal battery source and an external source.

The AccuVote OSX scanner is a high-resolution image-based optical scanning device and ballot box. The unit comes installed with AccuVote OSX software, which runs on the Windows CE operating system. Election and ballot information defined in GEMS is downloaded to PCMCIA memory cards that are then installed on the AccuVote OSX voting devices. The AccuVote OSX user interface is a bright, four-line 3.5” liquid crystal display (LCD) which works in conjunction with two selector buttons just below it. The AccuVote OSX Is configured to communicate with GEMS over a local area network, a modem, or a direct connection, and allows an administrator to select an option on the display by pressing one of the selector buttons for tasks that are performed Pre- and Post- Election. The LCD is covered with a locked compartment cover during the election.

The AccuVote OSX features a smart card and password system and supports user defined security keys. It produces reports, logs, and status messages on a thermal printer, generates audit log records for every transaction performed on the unit from the time it is powered on until it is powered off and protects access to the printer and memory card compartments, the rear of the unit where the power button, smart card reader, and communication connections are located. The AccuVote OSX ballot box features three bins. The main compartment is divided into two bins, and there is a third bin in the door of the box. The AccuVote OSX uses the two internal compartments according to conditions set in GEMS and allows for the use of the bin in the door until the AccuVote OSX is replaced by a new unit, should a unit fail on Election Day. Access to the ballot box is protected by doors using locked compartments.

Voting Process: Upon entering the voting precinct, the voter will receive a paper ballot; the voter shades in the paper ballot with any standard pen or pencil and inserts the ballot into the Accuvote OSX, where they are given a chance to review their votes. As votes are entered, the Accuvote-OSX stores the vote tallies on its internal memory card. When the polls close, the Accuvote OSX then transmits the voting data from the polling place to the central host computer by way of a modem.

1. After you check in at the polling place, a poll worker will give you a paper ballot, which you will mark with the pen provided. Be sure to verify with the poll worker that you are using the correct pen for the machine used in your polling place.
2. Mark your choice on the ballot by darkening the oval (above right) next to your candidate’s name or selection. Follow the directions carefully to be sure your mark will count.
3. To cast a write-in vote, there are two steps: first, darken the oval for the Write-In position in that contest. Second, write the name of the person you are voting for on the line next to the Write-In oval. You must complete both steps to be sure your write-in vote will be counted!
4. When you have made all the choices you wish to make, review your ballot carefully. If you have made a mistake marking your ballot, ask a poll worker for another ballot.
5. When done voting, take the ballot to the scanning machine and insert it face up. If you have voted for more candidates for a race than can be elected (“over voted”), the machine may reject your ballot and will offer you the opportunity to correct your mistake. You may choose to submit your ballot as is, or correct the over-vote by marking a new ballot. (If you submit as is, your votes will be counted for all races except the over-voted race.)
6. If the scanner is not working, your ballot will be secured to be scanned later.

During EAC certification testing, the AccuVote OSX was updated to account for an issue where system counter will reset to zero: A hardware reset was affecting the Protective System Counter (PSC), which was archiving the counter only during graceful shutdowns. The hardware reset was zeroing the counter without the current count being archived. The fix for this issue is to now archive the counter after each ballot cast. The modifications made to the PSC affect what the system looks for to trigger an archive of the count. Now, instead of waiting for a signal that the system is gracefully shutting down, the system looks for each event of a ballot being cast. Additionally, the date presented on results tape could be incorrect, as it was using the system date (UTC) instead of the local date. If generated in a time zone that was still in the current day, while the UTC time zone had transitioned into the next day, the results tape would have an incorrect date stamp. The fix for this issue was to reference the local date instead of the UTC date, so that when run in the same scenario that illustrates the issue, the results tape now reflects the correct date.

Ideally, the OSX’s exposed ports, memory card access areas, ballot box doors and case seams would be covered with tamper-evident security seals. The integrity of these seals should be maintained at all times, and only breached under controlled, explained circumstances. Seals should be logged to maintain chain of custody of sensitive materials.

Corrupt memory cards may be able introduce viruses, cause the main election server to crash and falsify votes. Access to the
memory card should be controlled, monitored and logged at all times.

Some Optical Scan systems have trouble reading red inks or inks with red in them. Voters should use the writing instrument provided at the polling
place or, if voting at home, black ballpoint pen that does not bleed through paper.

In 1979, Bob Urosevich founded American Information Systems and served as the President of AIS (now known as Election Systems & Software) from 1979 through 1992. In 1995, Bob Urosevich started I-Mark Systems, whose product was a touch screen voting system utilizing a smart card and biometric encryption authorization technology. Global Election Systems, Inc. (GES) acquired I-Mark in 1997, and on July 31, 2000 Mr. Urosevich was promoted from Vice President of Sales and Marketing and New Business Development to President and Chief Operating Officer. On January 22, 2002, Diebold announced the acquisition of GES, then a manufacturer and supplier of electronic voting terminals and solutions. The total purchase price, in stock and cash, was $24.7 million. Global Election Systems subsequently changed its name to Diebold Election Systems, Inc. In 2006, Diebold decided to remove its name from the front of the voting machines for strategic reasons. In August 2007 the company changed its name to “Premier Election Solutions”. Premier Election Solutions was acquired on September 2009 by Election Systems and Software (ES&S) and was subsequently partially acquired by Dominion Voting Systems on May 19 2010 following a 2010 antitrust settlement.