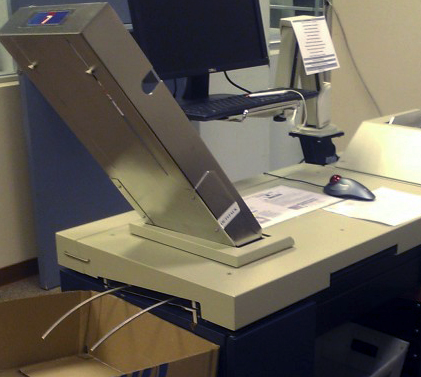 The Optech 400-C is a high capacity scanner used by election ofﬁcials to count ballots in a central location. The Optech 400-C originally developed by Business Records Corporation and later by both Sequoia Voting Systems and Election Systems and Software. As the result of an antitrust settlement, ES&S ceased production of the Optech 400-C in 1997 but continues to service the equipment in many jurisdictions. (In jurisdictions with maintenance contracts with ES&S the equipment is often called the Optech IV-C or Model 400.) Ballots are cast in precincts and placed in ballot boxes. The ballots are then delivered by two poll workers to the central count facility, where they are fed by an election ofﬁcial into the 400-C. Because it is used by election ofﬁcials in a secure, central location, the 400-C does not provide voters with feedback about ballot problems.

The system consists of a high-capacity scanner linked to a PC running Microsoft Windows. The 400-C uses a proprietary tabulation program, WinETP, to process the ballots that it scans. WinEDS is used to conﬁgure the ballot deﬁnition ﬁles and precinct identiﬁers that instruct the 400-C’s as to how to interpret each ballot voter’s ballot marks. The ballot deﬁnitions are then transferred from WinEDS to the 400-C via removable media, such as USB sticks, DVDs, or ﬂoppy disks. When the 400-C is done tallying the results for the election, the results are copied from the 400-C onto a DVD or a memory cartridge and transferred to the WinEDS server. The WinEDS server combines these results with those from any Insight and Edge units used in the jurisdiction. Finally, WinEDS generates tally reports for the election.

1. After you check in at the polling place, a poll worker will give you a paper ballot, which you will mark with a pen or pencil. Be sure to verify with the poll worker that you are using the correct pen for the machine used in your polling place.
2. Mark your choices on the ballot by completing the arrow (or fill in the oval on ES&S ballots) next to your candidate’s name or selection. Follow the directions carefully to be sure your mark will count.
3. To cast a write-in vote, there are two steps: first, complete the arrow (or fill in the oval on ES&S ballots) to the Write-In position in that contest. Second, write the name of the person you are voting for on the line next to the Write-In arrow. You must complete both steps to be sure your write-in vote will be counted!
4. When you have made all the choices you wish to make, review your ballot carefully. If you have made a mistake marking your ballot, ask a poll worker for another ballot.
5. When finished making your choices, place your ballot in the ballot box. All ballots in your county will be counted at a central location after the polls close. Because your ballot is counted after you leave the polling place, you will not be alerted of any over-votes or under-votes.

IMPORTANT
Over-Votes: If a voter casts votes for more than the allowable number of candidates in a contest or cast votes for and against an issue in a contest. Over-voted races cannot be counted. In jurisdiction using a central count voting method there is no way for a voter to be notified of an overvote so be very careful to vote for only the allowable number of candidates in any contest (in most cases one). If you do accidentally over-vote and you have not put your ballot into the ballot box, you can request a new ballot from an election official. You will be asked to sign a Spoiled Ballot Affidavit. You may “spoil” up to two ballots and receive another (three ballots total). Once you drop your ballot in the ballot box, no changes can be made.