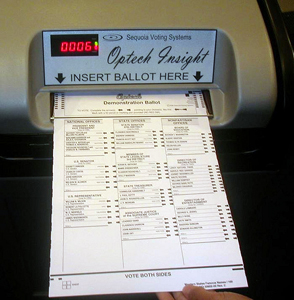 The Optech Insight consists of an electronic ballot counting device which reads completed ballots by scanning for the voters’ marks indicating their preferences. The scanner sits atop a ballot box. The Optech Insight also tabulates the results after the polls close, which are both printed on a paper copy and stored to an internal memory card. The Insight runs off both internal and external power to reduce the risk of malfunctions, and it can store voter data on an internal memory card.

Upon entering the polling place, the voter will receive a paper ballot. The voter makes choices on her ballot by connecting an arrow next to her choice of candidate or issue position.

The voter inserts the ballot into the scanner at the top of the device, which reads the marks on the ballot. If the voter has overvoted (voted for more candidates than eligible), the Insight will eject the ballot for the voter to review again, or deposit the ballot into the ballot box. If the voter has cast a write-in vote, the scanner will feed the ballot into a center bin so that pollworkers may process the write-in votes. Ballots that require no review by pollworkers are deposited into a rear bin. A front, auxiliary bin is available in case the machine is not functioning during polling hours; voters deposit ballots into the auxilary bin manually, but they will not be able to use the auxilary bin unless pollworkers have unlocked it.

As votes are entered, the Optech Insight stores the vote tallies on its internal memory card, and when the polls close, the Optech Insight prints out a paper copy of the election results for polling officials. The Insight has an optional modem for transmitting election results, and can also transmit results via a proprietary Sequoia device called a Hybrid Activator and Accumulator (HAAT). The HAAT accumulates results from machines in a polling place, and transmits them to the jurisidiction’s central election office via a wireless cellular network.

1. After registration, take you ballot from the poll worker to the voting booth.
2. Make your selections by completely filling in oval next to the candidate’s name with the marking-device (read: pen) provided. Make sure not to over-vote.
3. For write in candidates, fill in the oval next to Write-in and write the candidate’s name there.
4. Review your selections for accuracy and completeness; you can ask a poll worker for a new ballot if you make a mistake.
5. Feed your ballot into the Optical Scanner/Tabulator to cast your vote. The system will notify you if you have over-voted in any race.

Ideally, the Insight’s exposed ports, memory card access areas, ballot box doors and case seams would be covered with tamper-evident security seals. The integrity of these seals should be maintained at all times, and only breached under controlled, explained circumstances. Seals should be logged to maintain chain of custody of sensitive materials.

The keys for the Insight and Insight Plus models are the same for all machines and are easily pickable with readily available tools. Care should be observed around the ballot box lock and the scanner key lock (turns the system off and on).

Corrupt memory cards may be able introduce viruses, cause the main election server to crash and falsify votes. Access to the memory card should be controlled, monitored and logged at all times.

The main software chip on the Insight, the HPX chip, is easily replaceable with minimal access to an Insight scanner. A malicious HPX chip could count votes incorrectly, selectively accept or reject ballots and ignore system software updates.

Some models of the Optical Scan systems have trouble reading red inks or inks with red in them. Voters should use the writing instrument provided at the polling place or, if voting at home, black ballpoint pen that does not bleed through paper.