Give Us The Ballot | Dr. Martin Luther King Jr.

The following passage is excerpted from a speech that Dr. King delivered before the Lincoln Memorial at the March on Washington on May 17 1957, three years after Brown v. Board of Education and eight years before the enactment of the Voting Rights Act. 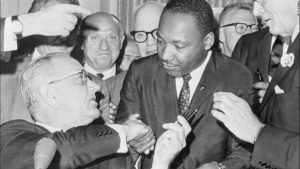 Three years ago the Supreme Court of this nation rendered in simple, eloquent and unequivocal language a decision which will long be stenciled on the mental sheets of succeeding generations. For all men of good will, this May 17 decision came as a joyous daybreak to end the long night of segregation. It came as a great beacon light of hope to millions of distinguished people throughout the world who had dared only to dream of freedom. It came as a legal and sociological deathblow to the old Plessy doctrine of “separate-but-equal.” It came as a reaffirmation of the good old American doctrine of freedom and equality for all people.

Unfortunately, this noble and sublime decision has not gone without opposition. This opposition has often risen to ominous proportions. Many states have risen up in open defiance. The legislative halls of the South ring loud with such words as “interposition” and “nullification.” Methods of defiance range from crippling economic reprisals to the tragic reign of violence and terror. All of these forces have conjoined to make for massive resistance.

But, even more, all types of conniving methods are still being used to prevent Negroes from becoming registered voters. The denial of this sacred right is a tragic betrayal of the highest mandates of our democratic traditions and its is democracy turned upside down.

So long as I do not firmly and irrevocably possess the right to vote I do not possess myself. I cannot make up my mind — it is made up for me. I cannot live as a democratic citizen, observing the laws I have helped to enact — I can only submit to the edict of others.

So our most urgent request to the president of the United States and every member of Congress is to give us the right to vote. Give us the ballot and we will no longer have to worry the federal government about our basic rights.

Give us the ballot and we will no longer plead to the federal government for passage of an anti-lynching law; we will by the power of our vote write the law on the statute books of the southern states and bring an end to the dastardly acts of the hooded perpetrators of violence.

Give us the ballot and we will transform the salient misdeeds of blood-thirsty mobs into calculated good deeds of orderly citizens.

Give us the ballot and we will fill our legislative halls with men of good will, and send to the sacred halls of Congressmen who will not sign a Southern Manifesto, because of their devotion to the manifesto of justice.

Give us the ballot and we will place judges on the benches of the South who will “do justly and love mercy,” and we will place at the head of the southern states governors who have felt not only the tang of the human, but the glow of the divine.

Give us the ballot and we will quietly and nonviolently, without rancor or bitterness, implement the Supreme Court’s decision of May 17, 1954.