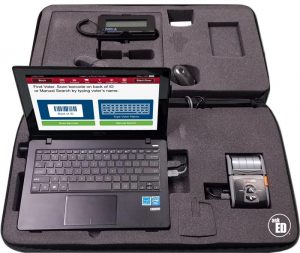 The Robis AskED ePollbook is an electronic poll book system that runs on commercial off-the-shelf (COTS) laptops or tablets running the Windows 10 Pro Operating System. The system is intended to replace printed paper poll books and be user-friendly for poll workers, with its built-in AskED Election Decision SupportTM system to guide poll workers through simple yes or no questions to determine each voters’ eligibility, determine each voter’s correct ballot style, and determine whether a voter must complete any required paperwork.

When the application is run on a laptop, the ePollbook setup includes a Zebra barcode scanning gun, and a Topaz signature pad. If a jurisdiction is running the AskED application on a tablet, a barcode scanner is integrated into the tablet and signatures can be entered directly on the ePollbook’s screen. The AskED epollbook application can be configured to work with a ballot on-demand printer and a COTS Bixolon printer for printing directions.

When opening a polling place, poll workers place the storage bags with the power cord tag side resting on the tables. Poll workers simply unzip the lightweight all-in-one connected bags in which all AskED ePollbook equipment is pre-wired, leave all hardware in the cases, open the power cord pouches, and plug in the power cords. In a jurisdiction using ballot-on-demand printers, the poll workers can next connect the printers.

Poll workers can look up voters by scanning their identity documents or by entering the voters partial or full last name, first name, and birth date, or by searching a voter’s address. The ePollbook application displays a list of voters whose information matches that entered and the poll worker selects the appropriate voter. The poll worker next views the voter’s information screen, which displays the voter’s name, address, birth date, political party, voter ID, and status. The poll worker can confirm the voter’s information is accurate and ask the voter to sign either the signature pad attached to the laptop or sign on the screen, in jurisdictions fielding tablets. 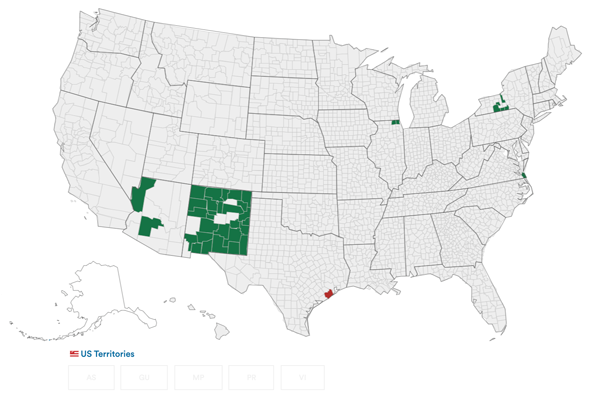 The AskED ePollbook software can operate without an internet connection or connection to other ePollbooks. The ePollbook hardware can be hardwired or wireless. Connections are IP-restricted and secured with SSL TLS 1.2, and can be set up with a hardware VPN. When the ePollbook is set up to run wirelessly, all connections are 256bit WPA2 and a 63+ character password is required.

When connected, the ePollbooks synchronize their data with a jurisdiction’s central database in near-real-time to update information from the jurisdiction’s voter registration system, and vice versa. Robis Elections will provide firewall-level IP filtering to be used with the Command Center and Help Desk.

A jurisdiction can also choose to have their AskED ePollbook applications automatically “self-destruct” and delete voter data a certain number of hours after polling places close or after Election Day.

Robis Elections was established in 1991 by David Davoust. The company is headquartered in the Chicago area, with a Regional Election Support Center in Albuquerque, NM. The ED in its systems line stands for Election Decision. Robis Elections systems are intended to allow for flexibility, including transitioning from polling places to vote centers.