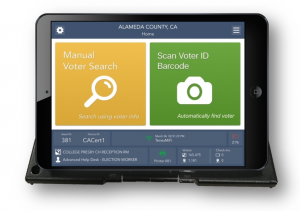 The Tenex Precinct Central is an electronic poll book used in place of printed paper poll books to check in voters, determine whether they have already received or voted a mail ballot, update voter information, and direct voters in the wrong location to their correct polling place. The Precinct Central unit is composed of Tenex Precinct Central ePollbook software running on an Apple iPad, which sits on a proprietary “flip and share” stand that can be tilted back and forth between the poll worker and the voter like a seesaw, with the screen adjusting to face either person right side up. Each iPad is equipped with an 8-megapixel camera to scan voter identification document barcodes and, in 2020, the Precinct Central touchpad is running on Apple iOS 10 or 11 and should remain compatible with new versions of iOS as they become available.

When opening the polling place, poll workers unpack the lightweight blow-mold Gemstar cases, each containing two Precinct Central units, two printers, a MiFi unit (model varies by jurisdiction), two styluses, additional printer paper rolls, charging cords, and a cleaning cloth. Each Precinct Central touchpad is matched with a printer, which is labeled to the purpose. Poll workers connect each unit to a power outlet via a Belkin 10-foot-long cord, with the option to use a backup battery pack with a 10-hour lifespan. The touchpads should turn on automatically and can be powered on with the power button if they do not. The poll workers next assemble the Epson TM-m30 bluetooth printers, each of which houses a 250-foot receipt paper roll and can print reports, affidavits, and polling location directions on-demand.

To launch the Precinct Central ePollbook application, a poll worker touches the EPB icon on the touchpad’s screen. The jurisdiction’s information screen appears, listing the polling place, device ID, number of voters and checked in voters, device battery life, and network and printer connections. The poll worker touches the START button and proceeds to the login screen to enter their full first and last name. The poll worker is prompted to answer whether they are working at the advanced help desk, which typically processes provisional ballots and address changes, and is then prompted to enter a password to unlock the application.

The home screen of the Precinct Central electronic poll book software displays the option to manually search for a voter or scan a voter’s identity document. From this screen, the poll worker can also spoil and re-issue a ballot, see a log of checked in voters, and reprint authority to vote slips.
To check in a voter, the poll worker selects either Manual Voter Search or Voter ID Scan. Each touchpad has a sticker on its back side to guide the poll worker in properly placing the voter’s scannable identity document. The Precinct Central application automatically brings up the voter’s information screen and displays a voter eligibility message noting whether or not the voter is eligible to vote in this election.

If allowed by the jurisdiction, a poll worker can transport a Precinct Central touchpad outside the polling place for curbside voting. The poll worker looks up the voter and selects MORE OPTIONS, and then “Curbside Voter.”

If a voter is at the wrong polling place in a county with more than one polling place, their voter information screen will note “Wrong Location.” From this screen, a poll worker can update the voter’s address, if applicable, issue a provisional ballot, if demanded, or redirect a voter to their correct voting location. The Precinct Central application provides a map with instructions for the voter to find their correct polling place, which the voter may receive via text or email.

When closing the polling place, poll workers select the settings menu from the home screen and then choose “Logout.” Poll workers have the option to cancel, log out temporarily, or close the election. After choosing to close the election, a poll worker receives a warning message, and selects “YES” to confirm. The Precinct Central synchronizes voter data and displays a Device Locked screen, which shows the device ID and the number of ballots and provisional ballots issued. The poll worker next taps the gear shift icon and selects the red SHUTDOWN button from the dropdown menu. The poll worker receives a confirmation message and selects YES, and can then shut down the touchpad by holding down the power button.

After unplugging cords and flipping the stands closed, poll workers can turn of MiFi equipment, turn off printers, and place all equipment into the cases, which can be latched and stacked for storage. 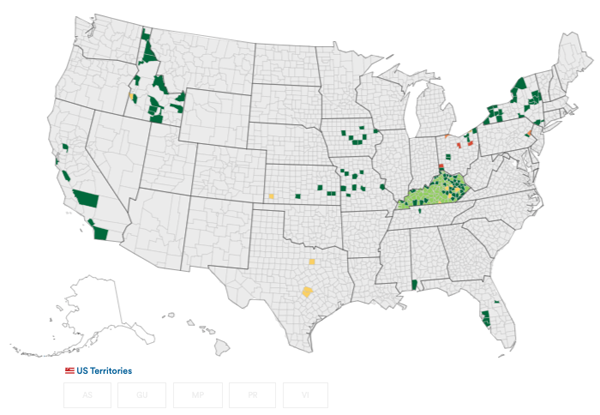 Precinct Central touchpads are deployed in Single App Mode so that the electronic poll book software is the only accessible application for poll workers on Election Day. Each unit is preconfigured by Tenex with the most current (and state-certified, if applicable) version of Apple’s iOS. Each touchpad is enrolled in Mobile Device Management (MDM), meaning Tenex can remotely push software application updates to iPads as they are rolled out, with approval from the state. Single App Mode is also configured by Tenex via the MDM, and updates to the Precinct Central Console are likewise made remotely by Tenex. These updates are scheduled with elections offices.