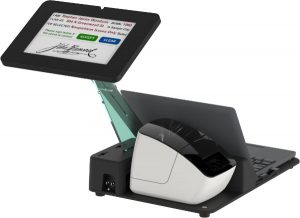 VOTEC’s VoteSafe electronic poll book system is used in place of printed paper poll books to check in voters and serves as a comprehensive election management tool. VoteSafe software can be run on a commercial off-the-shelf (COTS) laptop or tablet, and supports the retrieval of a voter record, records voting history, and allows poll workers to confirm a voter’s eligibility, precinct, and ballot style. VoteSafe connects to VOTEC’s election management tool, PollPower, which monitors polling places and voter activity levels. Election officials can use PollPower’s dashboard interface to confirm in real-time that polling places are opened and closed on time, as well as see voter check-in counts by time and location.

In 2016, VOTEC debuted the WelcomeVoter Kiosk, an electronic poll book setup that includes a voter-facing tablet mounted on a stand, which connects to a poll worker-facing COTS laptop. The fixed arrangement allows both the poll worker and the voter to see the same screen without flipping a shared tablet back and forth. It also allows the voter to select party-specific ballots in primary elections, permits the voter to make changes to their information, and provides options and instructions in languages mandated in the jurisdiction.

When opening the polling place, poll workers in a jurisdiction using VoteSafe electronic poll book software on a COTS computer first power on the computer — often a laptop — and then double-click on the yellow padlock icon to launch the VoteSafe software. VoteSafe software loads and the poll worker follows the prompts to start the program, which includes entering a password from their training book, confirming the correct polling place and poll worker name, and reviewing election name and date. The poll worker can also check the computer wifi connection and test the label printer.

If the jurisdiction is using the WelcomeVoter Kiosk to check in voters, poll workers remove the WelcomeVoter Kiosks from their ruggedized storage cases using the straps attached to each foam storage platform. The WelcomeVoter Kiosk setup includes an encased Acer tablet with an Intel processor, a stand arm to hold the tablet, a Brother label printer, an Acer laptop, a barcode scanner, two stylus pens, a mouse and mousepad, power cords, and a power box to power the tablet and printer. To set up the kiosk, the poll worker attaches the stand arm to the base of the kiosk and slides the tablet onto its stand arm, then attaches each stylus via a tether to the attachment loops under the tablet. The final step is to attach the large power cord to a wall outlet or surge protector and power on the systems.

To check in a voter using the VoteSafe electronic poll book software on a computer, a poll worker starts from the main screen, which prompts the poll worker to select VOTER HAS PHOTO ID or VOTER DOES NOT HAVE PHOTO ID. To check in a voter using their photo ID in a jurisdiction that has interfaced a ballot card printer with the VoteSafe electronic poll book software, a poll worker first inserts a blank ballot card into the printer and selects VOTER HAS PHOTO ID.

The poll worker next selects which identity document the voter has proffered and scans the ID using the barcode scanner. A list of voters’ names and addresses appear on the computer screen and the poll worker selects the correct voter’s name. If the voter does not have an approved photo ID or has no photo ID, the voter can complete a Reasonable Impediment Form, if applicable.

Poll workers can also reprint a voter’s check-in label or ballot card by selecting REPROCESS VOTER. If a voter has requested a mail ballot, the poll worker will be notified on the screen and can process the voter by choosing from three options: voter surrenders ballot and votes, voter received a notice that their mail ballot was canceled, or voter must vote a provisional ballot.

When closing the polling place, poll workers are advised to check the System Usage box on the home screen to ensure that the number of check-in messages queued is zero. The poll worker then selects LOGOUT and receives an “End of Day?” message, to which they may answer YES or NO. The poll worker then verifies that the connection status and queued messages number is correct and selects SUBMIT to log out of the VoteSafe program. 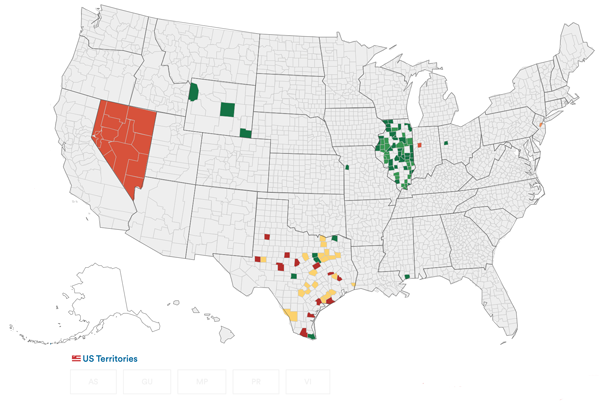 The VoteSafe electronic poll book software allows poll workers to communicate with officials in the county elections dpartment via a live connection. From the start screen, the poll worker sees “Live Help” and the option to select NEW to start a new chat. The poll worker can type and send messages, which can be responded to by the elections office, who receives a “New Message” notice whenever a poll worker sends a message.