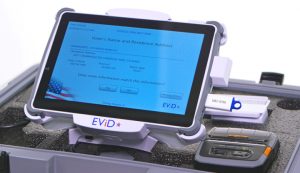 The VR Systems EViD (Electronic Voter iDentification) is an electronic poll book system used in place of printed paper poll books to check in voters, determine whether they have already received or voted a mail ballot, update voter information, and direct voters in the wrong location to their correct polling place. EViD electronic poll book software can be run on a commercial off-the-shelf (COTS) laptop owned or rented by a jurisdiction. The optional DirectPrint ballot interface allows jurisdictions to print ballots in-house.

The EViD electronic poll book software application can run in one of three modes:

When opening the polling place, poll workers remove the EViD Edge or EViD Compact devices from their cases, or power on their laptops to run the EViD software program. The EViD Edge tablet is stored in a military-grade storage case along with the tablet case, cables, power adapters, tablet stand, barcode scanner, signature pad, and 3″ bluetooth thermal receipt printer. The EViD Compact is stored in a smaller case with its cords and attachable signature pad. Both units are equipped with a stylus for the voter to use on the attached signature pad.

If using the EViD Edge or EViD Compact, the poll worker powers on the system and the EViD software automatically launches. Poll workers log in to their devices and, after advancing to the home screen, see their initials, the software application (Early Voting, Voter Check-In Station, or Clerk Station), the polling place location, device battery life, and options for checking in voters.

The EViD program next requests the voter’s signature, which the voter either signs on the attached electronic signature pad, if using the EViD Compact or EViD laptop software. If the voter is being checked in on the EViD Edge, the poll worker flips the tablet like a seesaw toward the voter and the screen automatically adjusts to display the screen right side up to the voter. The voter uses the attached stylus to sign their signature, which can be cleared and remade, if needed. The poll worker accepts the voter’s signature and the program prompts the thermal printer to print a receipt.

EViD electronic poll book software holds voter registration data for all active and inactive voters in a jurisdiction. If a voter’s information is incorrect, a poll worker running the Clerk Station program can update a voter’s name or address, or move the voter into the precinct. If a voter is in the incorrect polling location, the poll worker can print directions to the voter’s correct polling place. 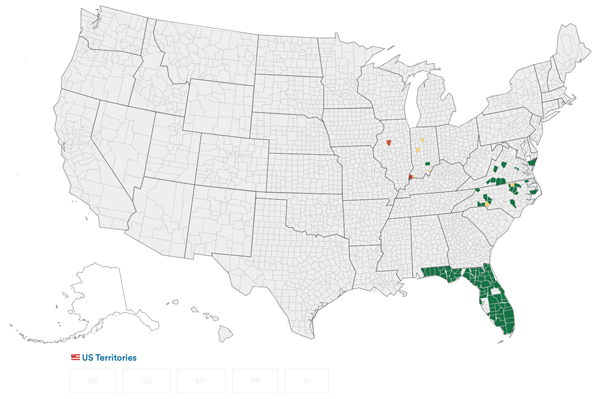 Potential for Voters to be Checked-in More than Once

In 2016 in Durham County, North Carolina, EViD electronic poll books at five precincts experienced crashing, incorrect messaging that told poll workers to ask voters for a photo ID (despite the voter ID law in North Carolina having been struck down), and erroneous indications that at least nine voters had already cast a ballot when they had not. Upon learning of this issue, the state ordered Durham County to switch to paper poll books; however, this created delays—one precinct reported that voting stopped for two hours—and some voters left without casting their ballots. Durham County’s board of elections unanimously asked the state for permission to extend voting by 90 minutes in all eight precincts; however, only two were allowed to stay open an hour longer than planned.

Russian Phishing and Hacking in 2016

In August 2016 VR Systems reported to the FBI that its employees were the target of a malicious email campaign that was believed to be linked to Russia. VR Systems stated that the so-called spearphishing attempt was unsuccessful. A year later, VR Systems commissioned a forensic investigation from Protus3, a cybersecurity firm, which stated that the company was not hacked and that it appeared that the problems were caused by user error. Although VR Systems warned customers about a malicious email campaign that might target them, it wasn’t until after this investigation that VR Systems customers learned of the attack on the company itself.

In June 2017, The Intercept published a leaked NSA document that revealed Russian hackers had sent malicious emails to employees of a voting technology company in August 2016 with the intent of hacking into their company email accounts. VR Systems was not named; however, the North Carolina State Board of Elections launched its own investigation, seizing 40 laptops from Durham County and suspending EViD’s certification in more than 20 North Carolina counties. During its investigations, the state discovered about another 2016 security issue: The day leading up to Election Day in 2016, Durham County was experiencing problems loading its voter data onto USB drives (“activators”), which were to be used with its EViD electronic poll books. To troubleshoot the problem, VR Systems connected remotely for several hours to a central computer in Durham County to communicate with and download the voter list from North Carolina’s State Board of Elections, potentially opening a gateway.

In June 2019, 18 months after a request from North Carolina, the Department of Homeland Security announced that it would conduct a forensic analysis of the computers used in Durham County during the 2016 presidential election. The FBI added two Florida counties to Durham County as victims of 2016 breaches by Russian hackers.

VR Systems was founded in 1992. The small business started with a voter registration system, VoterFocus, and, in 2004 in response to devastation caused by Hurricane Charley in South Florida, VR Systems created the EViD electronic poll book designed to check in voters at central locations. In 2010, VR became a 100% employee owned company (ESOP).