How Not to Measure Security 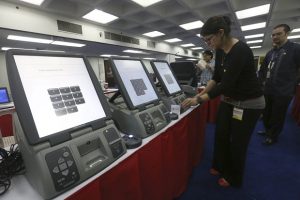 COMELEC/ DECEMBER 12,2014
Technical staff of Smartmatic demonstrate their automative vote reading machine at COMELEC in Intramuros Manila, Friday, Smartmatic is one of the two companies competing for the contract for the voting machine in the 2016 elections.
INQUIRER PHOTO/JOAN BONDOC

This article was originally posted at Freedom to Tinker on August 10, 2015. It is reposted here with permission of the author.

A recent paper published by Smartmatic, a vendor of voting systems, caught my attention. The first thing is that it’s published by Springer, which typically publishes peer-reviewed articles – which this is not. This is a marketing piece. It’s disturbing that a respected imprint like Springer would get into the business of publishing vendor white papers. There’s no disclaimer that it’s not a peer-reviewed piece, or any other indication that it doesn’t follow Springer’s historical standards. The second, and more important issue, is that the article could not possibly have passed peer review, given some of its claims. I won’t go into the controversies around voting systems (a nice summary of some of those issues can be found on the OSET blog), but rather focus on some of the security metrics claims.

The article states, “Well-designed, special-purpose [voting] systems reduce the possibility of results tampering and eliminate fraud. Security is increased by 10-1,000 times, depending on the level of automation.”

That would be nice. However, we have no agreed-upon way of measuring security of systems (other than cryptographic algorithms, within limits). So the only way this is meaningful is if it’s qualified and explained – which it isn’t. Other studies, such as one I participated in (Applying a Reusable Election Threat Model at the County Level), have tried to quantify the risk to voting systems – our study measured risk in terms of the number of people required to carry out the attack. So is Smartmatic’s study claiming that they can make an attack require 10 to 1000 more people, 10 to 1000 times more money, 10 to 1000 times more expertise (however that would be measured!), or something entirely different?

But the most outrageous statement in the article is this:

The important thing is that, when all of these methods [for providing voting system security] are combined, it becomes possible to calculate with mathematical precision the probability of the system being hacked in the available time, because an election usually happens in a few hours or at the most over a few days. (For example, for one of our average customers, the probability was 1×10-19. That is a point followed by 19 [sic] zeros and then 1). The probability is lower than that of a meteor hitting the earth and wiping us all out in the next few years—approximately 1×10-7 (Chemical Industry Education Centre, Risk-Ed n.d.)—hence it seems reasonable to use the term ‘unhackable’, to the chagrin of the purists and to my pleasure.

As noted previously, we don’t know how to measure much of anything in security, and we’re even less capable of measuring the results of combining technologies together (which sometimes makes things more secure, and other times less secure). The claim that putting multiple security measures together gives risk probabilities with “mathematical precision” is ludicrous. And calling any system “unhackable” is just ridiculous, as Oracle discovered some years ago when the marketing department claimed their products were “unhackable”. (For the record, my colleagues in engineering at Oracle said they were aghast at the slogan.)

As Ron Rivest said at a CITP symposium, if voting vendors have “solved the Internet security and cybersecurity problem, what are they doing implementing voting systems? They should be working with the Department of Defense or financial industry. These are not solved problems there.” If Smartmatic has a method for obtaining and measuring security with “mathematical precision” at the level of 1019, they should be selling trillions of dollars in technology or expertise to every company on the planet, and putting everyone else out of business.

I debated posting this blog entry, because it may bring more attention to a marketing piece that should be buried. But I hope that writing this will dissuade anyone who might be persuaded by Smartmatic’s unsupported claims that masquerade as science. And I hope that it may embarrass Springer into rethinking their policy of posting articles like this as if they were scientific.